BDD: When surgery isnt the answer 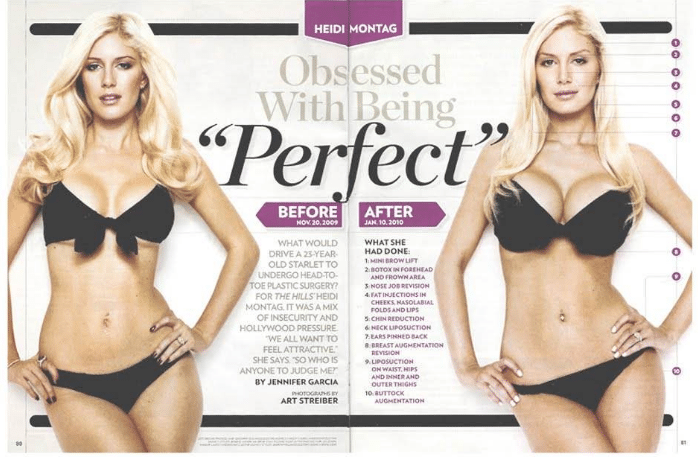 As a psychologist I’ve devoted my career to helping people move towards happiness and increase their overall quality of life.  The good news is that the research examining the emotional outcomes of people who undergo cosmetic procedures shows the majority receive psychological benefits like improved self-esteem, happiness and overall quality of life.

The bad news is that the positive emotional outcomes from cosmetic procedures isn’t universal. Even if the procedure is “successful” and achieves the desired aesthetic appearance this doesn’t always translate into satisfaction or improved body image.

A particular group of people who are especially vulnerable to negative emotional consequences are people with body dysmoprhic disorder.

Body dysmorphic disorder is a mental disorder where someone thinks there is a particular feature of their appearance such as their nose, lips, skin or breasts that is unbearably ugly. People with this problem look normal but are so convinced that they are disfigured or ugly that no amount of reassurance from friends or family can convince them otherwise.

Often sufferers of body dysmorphic disorder are very shy and some choose to stay home out of fear of being judged or laughed at because of the way they look. Many people with the disorder spend hours every day looking at themselves in the mirror. Some sufferers have exhaustive grooming habits to try and cover up their perceived flaw and might take hours to get ready to go out.

A brain problem rather than appearance problem

My research using brain imaging goes some way to explain why people with body dysmorphic disorder might see themselves as ugly, when no one else does. Using an MRI scanner we showed there are clear differences in the brains of people with body dysmorphic disorder that lead to changes in the way they process visual information. Another change was that there was a weak connection between the amygdala (the brain’s emotion centre) and the orbitofrontal cortex, the “rational” part of the brain that helps regulate and calm down emotional arousal.

Once our participants became emotionally distressed it was difficult for them to wind down because the “emotional” and “rational” parts of the brain simply weren’t  communicating effectively.

People usually develop body dysmorphic disorder during their teenage years, which happens to be an important time for brain development. They also often report childhood teasing about their looks, which may act as a trigger that rewires the brain to focus attention on physical appearance.

Do you have body dysmorphic disorder?

Distinguishing between normal body dissatisfaction and body dysmorphic disorder can be difficult, so the following questions are often used as a guide:

If you answered yes to any of these questions then this might be an indication of body dysmorphic disorder. Another way of evaluating yourself is using a test called the Cosmetic Procedure Screening Questionnaire. You can take the short test here.

How to get help

Accepting that you might have body dysmorphic disorder can be a difficult process. In fact, most people I meet in my practice suffer from mental anguish for years, have multiple surgeries before they might consider seeking psychological treatment. It’s important to know that you’re not alone, in fact about 2% of people will experience body dysmorphic disorder at some point in their life. There are thousands of people in Australia who have been through it and recovered.  But cosmetic surgery will not help you recover and will probably make things worse!

The good news is that once someone acknowledges they might have body dysmorphic disorder and makes the choice to seek psychological treatment, the mental distress is likely to reduce. Therapy works!

The treatment technique that psychologists use is called cognitive behavioral therapy (CBT). This helps patients modify unhelpful daily rituals and safety behaviours, such as mirror checking or camouflaging the perceived defect with make-up. Anti-depressant medication can also be useful.

In my psychology practice in Melbourne I’ve helped many Australians overcome and manage the disorder and lead full and happy lives. In this work I’ve also learnt a lot from my patients and I am thankful for the unique insights and experiences people bring.

If you feel that what you’ve read might be relevant to you I suggest you seek help by researching local Clinical Psychologists with expertise in the area. Most doctors and sadly many cosmetic surgeons are not aware of the problem, but once you find the right psychologist you can work together to improve your self-esteem, body-image and overall happiness.

Dr Ben Buchanan is a Clinical Psychologist specializing in body dysmorphic disorder, self-esteem and anxiety disorders. He is a lecturer in the Faculty of Medicine at Monash University and has a doctorate in neuroscience. He runs a private practice in Melbourne and also consults via Skype.